A Hundred Ways to be a Mom 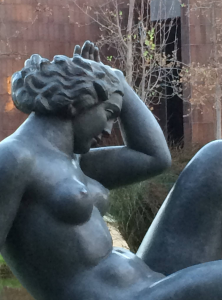 The plot curls inside you, hardly formed, just eight weeks along. Two months–still time for a miscarriage. Has anyone else ever had that happen? Told the world they were going to be a novelist and then had the damned book slide out slippery as a dead fish? It’s true what they say–you need a good counselor. It breaks your goddamned heart.

There’s only one thing you can do. Toss. Take a helluva big breath. Start again. Like the doctor said: You’re not too old. You can have another novel.

You don’t think it should be so hard.

Your mother says anything worthwhile should be a little hard.

Your husband is worthwhile, and sometimes he’s a little hard.

Which is why you tell him to get home from work while you’re ovulating. You can’t do this alone. You need every one of the ideas that shoot out of him. Conception is no easy business. The circumstances have to be just right. Precisely right. Basal thermometers. Pillows under your hips. OED on the bedstand. You are not the kind of woman who conceives easily.

You don’t tell anyone you’re pregnant. You’re afraid of jinxing it. You don’t want to have to say: No, I’m sorry. I’m not. No. I lost it. I know. Thanks for the sympathy. Really. I’m sorry too. I’m heartbroken. Everyone is sorry, sorry.

You don’t want to be put in that position again.

There are other concerns: what if somebody else tries to make a novel that looks like yours? If someone copies you? Tells the story and acts like it was theirs all along? You know it can happen, especially these days with the Internet. Actually, it has happened to you, and more than once. A friend called up one time and said, I just read a story you told me in Alice Newbold’s new novel. Page 172.

You found Alice Newbold’s new novel and damned if it wasn’t a good looking thing. A little thin, in your opinion, but gripping. And there on page 172, just like your friend said, your story. The central conceit of your gestating book.

And once you told a writer friend something about yourself that you’d never before confided. You swore her to secrecy. Weren’t you shocked when it ended up in one of her stories? In a story that won a prize? And the worst thing was you couldn’t tell anyone. You couldn’t trash her the way she deserved, because then you’d have to say this private thing.

Plus, plus, the title of her book was a phrase you said, that you might have used as a title yourself in the future. You searched her acknowledgements page–nothing.

Forget it. You’re not going to mention the book prematurely. You could miscarry. You could hemorrhage, die and then your story would get adopted by someone else. Get their last name tattooed on its spine.

You long to push the new one out before it’s ready. You’ve lived with it for months, for god’s sake, and you’re tired. You can’t sleep on your stomach. You can’t smoke. You can’t drink. All your friends are deserting you. They didn’t realize you could be this boring. No matter what the doctors say, you’re not getting any younger. You have grey shooting through your hair, and wrinkles (laugh lines). You have to get it out of you. All the hip authors are under thirty-five. They just are. It’s not fair, but it’s a fact. You have someone take an author photo in soft light. For god’s sake, you tell your husband. Just get me to the hospital.

The doctors examine you. They tell you it’s too early. The contractions are probably Braxton Hicks, and even if they’re real, the docs are going to give you something to hold them back. This story needs another six weeks. Minimally. This story isn’t ready to breathe on its own, they say. It’s intensely premature. Is that what you want? the doctors ask, mumbling through their masks? A story that can’t breathe on its own? A story with immature lungs? Lifelong learning problems? A story that won’t sell more than a thousand copies?

You don’t, of course. You want a famous story. A beloved story. A story that makes Oprah’s Book Club. But christ you’re sick of being pregnant. You feel like a cow. And anyhow, can’t they resuscitate even novellas these days? You’ve seen stories sixty pages long published as first novels. Sure, it’s true, they have tubes attached, cerebral palsy, they won’t ever walk, but– Just get it out of me, you say.

Go home, the docs tell you. It’s not your time. Get plenty of bed rest. See me in my office. We need to check your weight, your blood pressure. You need to get rid of some of those adjectives. I’m sorry, no. There isn’t any medication. It takes talent, skill, self discipline, compound sentences. No more adverbs. And straighten out that plot line. While you’re at it, wasn’t that piano on page 150 a guitar earlier on? Any swelling of the ankles? Any faintness on sudden rising?

You’re bloated. Your breasts are so sore you weep if someone so much as looks at them. Only why would anyone? You’re ugly. You’re fat and you’re ugly and there’s never going to be a story, anyhow. There isn’t. It’s all flatulence. It’s all wind.

Things they said the last time: You have what it takes to be a good writer.

This is good, but it’s not fully developed.

There are several awkward places.

It doesn’t seem likely to us that the protagonist would murder her husband.

Yet, we like it. We think the story has great possibility.

Maybe the next one.

The first couple postpartum months are rumoured to be brutal. Numerous strange hotel rooms are involved, so alike that you’re said to forget where you are and say to an Edmonton crowd: I’m thrilled to be nursing my novel in Vancouver tonight. You won’t have had enough sleep. Your hormones are wildly swinging–you’re as liable to break into tears as laughter.

But those are concerns for women who have finished their books. For books who’ve scored a ten on the Apgar scale. For books with publishers. Your novel won’t ever have a publisher. Because the stupid novel is never even going to get here. Never. You’re going to be waddling like an elephant until you’re sixty and it’s too late.

You’ve already passed your due date. After those contractions early on, fighting to keep the damned thing from being born too soon, now you can’t get rid of it. Two days, a week, two weeks. If it’s not done soon they’re going to have to induce you.

C-section. Your worst nightmare. They have to rip you open to get the book out.

Your water breaks all over your typewriter, ruining the climax. And oh no. There’s trouble. Meconium. Black flecks–the words you already edited out. You know what that means. All the how-to books you’ve riead have drilled it into you. This story has taken a breath of its own excrement.

The buzzer has gone off. You’re out of time. You have to get to the hospital. No turning back now. If you wanted to turn back, you should’ve considered abortion. It’s choice that you got this far.

You beg your husband to tell you things will be all right. Just say you love me, you beg. Just say I’m the best thing since cell phones. Just tell me my story is going to survive this. We’ll both survive this.

He’s good. He says all that. He whisks you to the car, props your feet in his lap under the steering wheel, says all the right things. But what does he know? What the hell does he know? He’s a fucking journalist.

And anyway. Why do they say labour doesn’t hurt? It hurts like a sonofabitch. You want drugs. Why shouldn’t you have drugs? They say no drugs, a natural birth, it’s what you wanted, you told them to ignore you when you changed your mind. Your asshole husband puffs in your face like a bellows. He’s useless, useless! Why did you sleep with him to begin with? What the hell were you thinking? He said, Stay home and take nine months to write. Hah! Hah!

You can do it, your husband says now. You’ve got what it takes. Way to go, honey. Good job.

Sometimes it’s all you can do.

You could push the Empire State Building out, you swear you could. You grunt and bear down. You leave bruise marks on your husband’s arm.

But fuck it. Fuck it. Who cares about delicacy at a time like this? You’re crying, and then a few minutes later, when the doctor says she can see the title page, you’re laughing.

Okay, hold on. The acknowledgements page is out. The dedication to your husband. Hang on. Here’s the text, wailing its newborn lungs.

They’re passing you the novel, now, and it’s beautiful. She’s beautiful. You can’t stop crying, but the tears are tears of joy. Your husband kisses your face. He’s the greatest husband. Didn’t he stand by you, thick and thin? He’s whispering to her. He’s stroking the five little pages of her denouement. He’s smitten. Look. He’s starting to cry.

She looks just like you, your husband says. She’s got your fontenal.

No wonder he’s weeping. She’s the most beautiful novel you’ve ever seen. You don’t care what anyone else says, because you’re in love. You’re head over heels.

One Comment to “A Hundred Ways to be a Mom”