Shut Up and Write sessions in Canada: do you have a location to share? 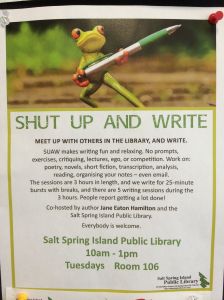 I’m sitting in the library on a sunny Tuesday in Shut Up and Write session. SUAW sessions originally formed in San Francisco before being brought to Canada by Tom Cho when he was writer-in-residence at Kogawa House in Vancouver. I kept them going after Tom moved to Toronto, and even though I later moved away from the city, they are still on-going Wednesday mornings in central Vancouver. There’s a FB page. Here we do them in person Tuesdays, but we’ve added several remote sessions most weeks, where one writes alone at home with one of us sending along the timing using FB message. Using the Pomodoro Method we write with each other for 25 quiet minutes, break for 5, and repeat three times before taking a 20-minute break. At the end of that, we do another 2 25-min sessions.

For someone like me who writes seven days a week, SUAW is a terrific means to cut off hours and write efficiently. Check to see if there’s a SUAW where you live, and if there isn’t, start one! Download a timer like Focus Keeper, find a location, invite folks and you’re ready to go!

One Comment to “Shut Up and Write sessions in Canada: do you have a location to share?”